Golden turmeric milk is the happening drink: from Hong Kong to London to San Francisco and everywhere in between. No prizes for guessing that  thousands of scientific studies crowning turmeric as the ultimate cure-all spice has something to do with the global proliferation. However, kudos to all those baristas, chefs, and bloggers who came up with their own culinary creations of this now ubiquitous drink. Personally, haldi doodh (Hindi moniker for turmeric milk) is a beverage I remember drinking from an early age (like most Indian kids.) Therefore, doing this recipe was super easy as I got it from my mom. In How to make golden turmeric milk, I unveil the abbreviated version of the authentic haldi doodh recipe that has been used for generations in my family.

Why abbreviated version? Growing up, most of the time my mom gave us the quick version of the original turmeric milk recipe--a hot glass of (dairy) milk mixed with a quarter teaspoon of ground turmeric and a couple of teaspoons of sugar. This was a perennial remedy for common cold, flu, and body aches. In my kitchen, I did not turn to making turmeric milk for a long, long time as I was not a big fan of this elixir growing up and I eat turmeric on a regular basis in most Indian meals. The full-version turmeric milk, my favorite, tastes nothing less than kheer (pudding) and includes high-protein chickpea flour as well as almonds (stay tuned). For now, let's move on with the easier version to make golden turmeric milk.

A note on using coconut milk in the recipe

My first experience of having golden turmeric milk was in San Francisco a few months ago. I was curious to have a vegan version of golden milk. I took a sip and decided not to take another because it was made with full-fat coconut milk. As much as I like the taste of coconut, I use it sparingly in every form as advised by the Harvard School of public health and many other trailblazers--doctors and researchers (stay tuned for Demystifying coconut). This is especially important if you have any type of cardiovascular condition. In short, coconut is very high in saturated fats, which if consumed in excess can lead to cardiovascular conditions such as raising bad (LDL) cholestrol.
As turmeric's bioavaiiablity increases when mixed with fat, the use of coconut milk sort of makes sense. But the good news is that you can also increase turmeric absorption with a pinch of black pepper. As I revealed in Demystifying Turmeric, if you are looking to get the health benefits of the spice, it needs to become part of your every day food. And drinking a cup of coconut milk everyday may not be the most optimal way of getting turmeric's health benefits.

Homemade almond milk (or store-bought, unsweetened) is a good choice as it also lets the turmeric taste shine in the beverage. If you do want to add oil, how about choosing one without saturated fats such as avocado oil or extra-virgin olive oil. I did try the recipe with avocado oil and it came out fine. Personally, I like this golden turmeric milk without adding any type of oil. Using hemp milk is another solution: it is naturally high in fat, just like dairy milk.

How much turmeric in a cup of milk?

As turmeric has medicinal benefits, an overdose can also cause adverse health effects, especially over a long period of time. One teaspoon/day, (around 3g), is the recommended ceiling. When I asked my mom to put 1/2 tsp per cup of milk, she responded, "too much!" I believe, in India, as people used turmeric twice (sometimes more) a day in everyday food, the turmeric milk recipe was carefully crafted so as not to exceed the one teaspoon/day limit. Based on this assumption, if turmeric is not part of your everyday meals, add half-a-teaspoon per cup of milk. I don't exceed the 1/4 teaspoon per cup. I did try the recipe with 1/2 tsp but did not like the taste as the turmeric became too heavy on the overall taste profile.

I don't usually make turmeric milk on a regular basis as I  get my daily dose of turmeric in dals, curries, soups, and Indian-style veggies. If you are looking to increase turmeric intake through food, do check out the following recipes with turmeric on Traffic Light Cook.

I have included a lot of variations in the recipe below. If you try it out, please leave a comment below or rate the recipe. 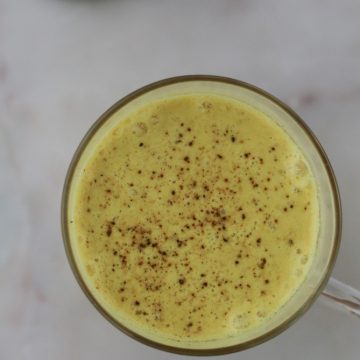 How to make Golden (Turmeric) Milk

*can also use hemp milk. If using hemp milk, you don't need to add any oil/fat as the milk is naturally high in fat.  **I have added avocado oil. You can replace it with coconut oil; but it is high in saturated fat. Another alternative is unsweetened, shredded dry coconut; add 2 tsp instead of coconut oil. Don't forget to strain the milk to get the smooth texture.  ***increase maple syrup to 2tsp if you like your drink to be a tad sweeter.  Vegetarian Version:

This website uses cookies to improve your experience while you navigate through the website. Out of these, the cookies that are categorized as necessary are stored on your browser as they are essential for the working of basic functionalities of the website. We also use third-party cookies that help us analyze and understand how you use this website. These cookies will be stored in your browser only with your consent. You also have the option to opt-out of these cookies. But opting out of some of these cookies may affect your browsing experience.
Necessary Always Enabled
Necessary cookies are absolutely essential for the website to function properly. These cookies ensure basic functionalities and security features of the website, anonymously.
Functional
Functional cookies help to perform certain functionalities like sharing the content of the website on social media platforms, collect feedbacks, and other third-party features.
Performance
Performance cookies are used to understand and analyze the key performance indexes of the website which helps in delivering a better user experience for the visitors.
Analytics
Analytical cookies are used to understand how visitors interact with the website. These cookies help provide information on metrics the number of visitors, bounce rate, traffic source, etc.
Advertisement
Advertisement cookies are used to provide visitors with relevant ads and marketing campaigns. These cookies track visitors across websites and collect information to provide customized ads.
Others
Other uncategorized cookies are those that are being analyzed and have not been classified into a category as yet.
SAVE & ACCEPT