This creamy mushroom medley soup is made with an assortment of portobello, cremini, and shiitake mushrooms. While the soup texture screams creamy due to the addition of chickpeas, you will not miss the ton of butter or cream used in the traditional cream of mushroom (or any vegetable) soup.

Mushroom, which is a fungus rather than a true vegetable, isn't very popular in India--at least at the time I was growing up. In fact, my mom never ever cooked with mushrooms. It took me a long time to appreciate its woodsy flavor and meaty texture. In fact, I remember that the dish that made me a mushroom fan (a long time ago) was cream of wild mushroom soup. However, I always felt uncomfortable adding dairy to a savory soup dish. Maybe it is the influence of Ayurveda, which considers milk and salt combination to be TOXIC[1]. But it's super easy to make soups creamy without adding any cream or milk --read on to find out what I have added to this creamy mushroom medley soup.

Mushrooms are one of the few sources of essential mineral selenium, which helps prevent cell damage and boosts immunity. In fact, this antioxidant is found in very few food ingredients. Additionally, mushrooms offer higher protein per serving compared to other vegetables (even if it is not a vegetable).

Mushroom is also one of the few food ingredients that naturally offers umami flavor. Umami is the fifth and last flavor after sweet, salty, sour, and bitter. Originating from the Japanese word "umai," which translates to "delicious," umami flavor is characterized by savory, meaty flavor. Scientists attribute this flavor to the high levels of the amino acid glutamate, which is a building block of protein. Umami is considered  flavor enhancer: the more umami present in a dish, the more flavorful it is. The umami in mushroom is the reason that you don't need to add a lot of salt to mushroom dishes.

Should you wash or wipe clean mushrooms? This is a source of confusion as you have probably seen many chefs on cooking shows suggest to wipe clean mushrooms. However, many celebrity chefs, including Alton Brown, propound that it's alright to wash mushrooms before cooking. If you are interested in finding more about this, do read THIS funny article on Good Eats fan page. So it would seem that it's ok to either wipe or wash mushrooms before cooking. I personally like to wipe them clean.

How is this soup so creamy? You have probably come across this tip in most soup recipes on TLC. I almost feel like a broken record, but I will still repeat it. Mixing salt and dairy is considered highly undesirable by Ayurvedic tradition. Even if you don't feel any negative side effects, in my opinion, it  robs the soup of the energy it is supposed to provide. Try using neutral flavor beans such as chick peas, navy beans, or cannellini beans. You can also add nuts, in small amounts, that complement the flavor of the soup. For example, almonds complement the flavor of many types of mushrooms. For a nut-free version, you can add pumpkin seeds.

What type of broth is best for mushroom soup? Often times mushroom broth is recommended for mushroom based soups or gravies. I almost never buy mushroom broth because I have not been able to find a low-sodium version. Also, in the interest of keeping the pantry not overstocked, I often use Easy Homemade Vegetable Broth for all of my cooking needs, except when I make oriental-style soups like this Tasty Vegan Ramen. For that my go-to broth is Asian Vegetable Broth. When I am busy and don't have time to make weekly broth, my go-to brand is Pacific Foods low-sodium, vegetable broth. Remember, a good broth brings a big smile to your soup.

Whenever you bring mushrooms from grocery stores, it is best to cook them as soon as possible as they tend to lose moisture and start reeking if left too long in refrigerator's veggies box. However, once you have cooked them into this creamy mushroom medley soup, you can enjoy this soup for 3-4 days. Just store in an airtight container in refrigerator and reheat in a pot with 1-2 tbsp of water in an appropriate-size pot over medium heat. I haven't done it yet, but you could also freeze this soup for up to three weeks. Just thaw overnight and reheat. Enjoy!

If you make this recipe, do let me know in the comments section. I would love to hear from you. 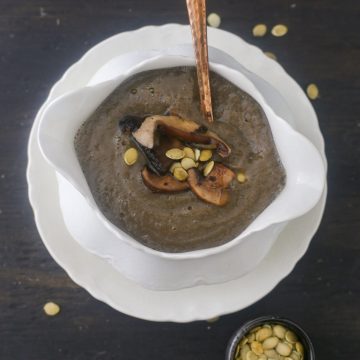 This creamy mushroom medley soup is made with an assortment of portobellos, cremini, and shiitake mushrooms. While the soup texture screams creamy due to the addition of chickpeas, you will not miss a ton of butter or cream used in the traditional cream of mushroom soup.
Print Recipe Pin Recipe
Prep Time 10 mins
Cook Time 24 mins
Course Soup
Servings 4
Calories 146 kcal

Hello, I am Garima Goel Lal: a certified health and nutrition coach. TLC is all about LIVING ENERGIZED. Here I share healthy global recipes, science- and observation-backed Becoming empowered about food and cultivating healthy habits. Read More About TLC HERE..

This website uses cookies to improve your experience while you navigate through the website. Out of these, the cookies that are categorized as necessary are stored on your browser as they are essential for the working of basic functionalities of the website. We also use third-party cookies that help us analyze and understand how you use this website. These cookies will be stored in your browser only with your consent. You also have the option to opt-out of these cookies. But opting out of some of these cookies may affect your browsing experience.
Necessary Always Enabled
Necessary cookies are absolutely essential for the website to function properly. These cookies ensure basic functionalities and security features of the website, anonymously.
Functional
Functional cookies help to perform certain functionalities like sharing the content of the website on social media platforms, collect feedbacks, and other third-party features.
Performance
Performance cookies are used to understand and analyze the key performance indexes of the website which helps in delivering a better user experience for the visitors.
Analytics
Analytical cookies are used to understand how visitors interact with the website. These cookies help provide information on metrics the number of visitors, bounce rate, traffic source, etc.
Advertisement
Advertisement cookies are used to provide visitors with relevant ads and marketing campaigns. These cookies track visitors across websites and collect information to provide customized ads.
Others
Other uncategorized cookies are those that are being analyzed and have not been classified into a category as yet.
SAVE & ACCEPT